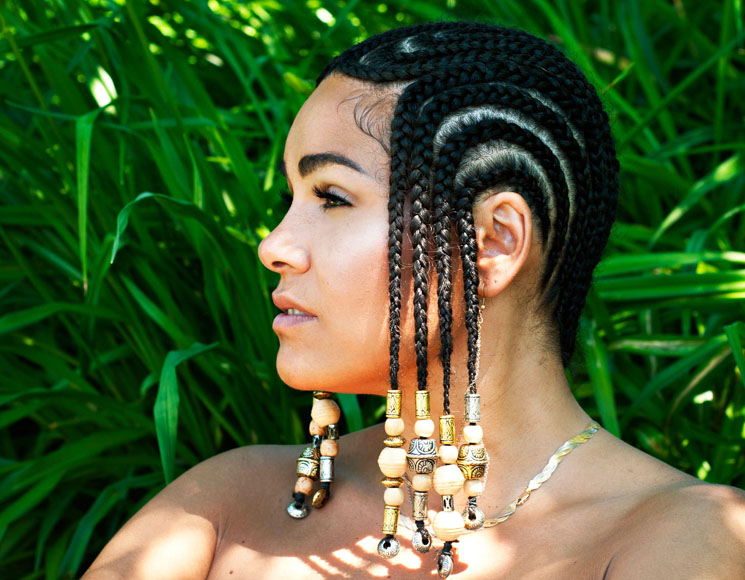 With new record The Secret Life Planets, Nanaimo, BC-born singer-songwriter Zaki Ibrahim reveals her first recordings since her 2012 album, Every Opposite, landed on the shortlist the Polaris Music Prize.

Two events — the death her father and birth her son — made for an emotionally challenging time, which helped determine the “sci-fi soul” direction her latest project. She worked on the record in South Africa, Canada and other parts the world while touring, and Ibrahim collaborated primarily with co-producer and co-writer Alister Johnson and multi-instrumentalist Casey MQ. The Secret Life Planets makes reference to her recent life experiences and events, leveraging elements classic soul, hip-hop, disco and house. Recorded “almost purely” analogue, the concept record dabbles in the mysticism sound and the actual tones made by the planets in our universe.

The death her father and the birth her son made completing the album a challenge.

“The album was just a cathartic thing,” Ibrahim tells Exclaim! “I lost my dad about four months before my son was born. So it was really a challenging thing, on top everything about preparing to be a mom, course. I was in the middle writing this album when this was happening. It actually allow me to deal with what I was feeling, and to explore a lot themes outer space, time travel, memories, nostalgia. It took me away, but at the same time, got me even deeper into who I am. What, surprisingly, came out was more joy than grief. Making the album kind helped me through all this stuff.”

“It’s a very analog record. It’s touching on music that have been done and things that have happened throughout time. It comes from hip-hop and the sampling age. There aren’t any samples, but there are a lot references throughout the record. Even the title kind sounds like Stevie Wonder’s] The Secret Life Plants, and it’s referencing all the frequencies that the planet and the universe are creating. It’s about keeping the integrity the music, throughout.”

Zaki spends her time living between Canada and South Africa, and being independent gave her time.

“It’s hard to say because there were some pauses. There was some touring while I was pregnant. I was also back-and-forth between] Canada and South Africa at the time. So I needed to block f time to be in the studio. We didn’t have a deadline, per se, as far as having a label breathing down your back, and that was great.”

Zaki defines success for the album, and herself, as being present and letting the future unfold.

“I’m not going to be an online personality that’s trying to get followers and stuff like that. I would burn myself out. That’s not me. It’s about being real, being present and success for the album is about continuing to be sincere.”

It was important that the overall aural and visual aesthetic came from her.

“It was a collaborative effort, but I was the director, like a filmmaker would be. The lyrics and the stories were there, and I had to be specific about being the boss the project. There are moments collaboration, but for this album, I definitely played the role producer, director and wearing all the hats.”

The Secret Life Planets comes out independently on January 31.