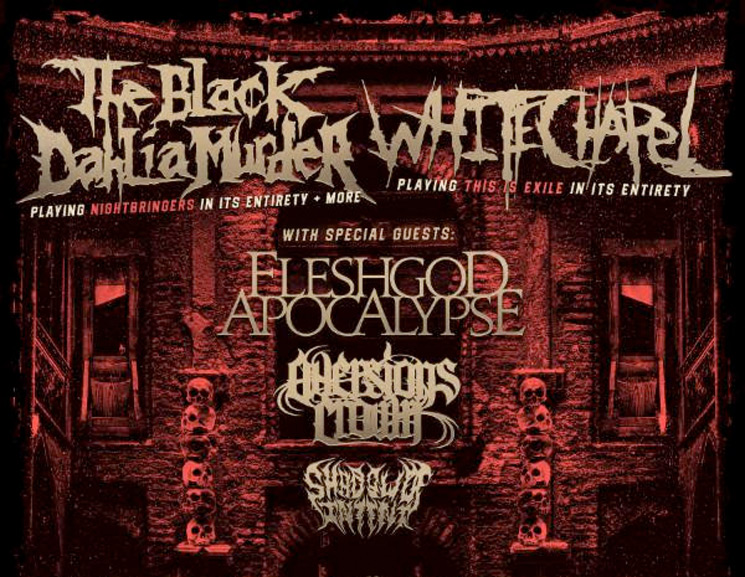 Giving you a lot bang for your buck, the Black Dahlia Murder and Whitechapel are teaming up for a co-headlining North American tour.

This spring, the metal titans will team up for the joint trek, with the Black Dahlia Murder set to perform their latest album, 2017’s Nightbringers, in full. Whitechapel, meanwhile, will be doing all their classic 2008 sophomore effort This Is Exile to celebrate the album’s 10 year anniversary.

Adding to all this, openers will include Fleshgod Apocalypse, Aversions Crown and Shadow Intent.

While there are a lot U.S. dates on the schedule, the sole Canadian stop will be in Toronto on June 12, when the bands will play the Opera House.

You can see the full schedule below.

In a statement, the Black Dahlia Murder said, “We’ve known Whitechapel since their humble beginnings and have watched them rise to be the important force in heavy music that they are now. It’s exciting to team up with them for this co-headlining tour that’s sure to decimate venues everywhere this summer! See ya soon!”

As for Whitechapel, they added, “We are excited to be doing a co-headliner with our friends and label mates the Black Dahlia Murder. To celebrate the ten-year anniversary This Is Exile, we will be playing it as a whole, and Black Dahlia will be playing their new record as a whole as well. It should be a great night metal.”

As previously reported, the Black Dahlia Murder will also be performing at Heavy Montreal, which takes place on July 28 and 29 at Parc Jean-Drapeau in Montreal.

* the Black Dahlia Murder only