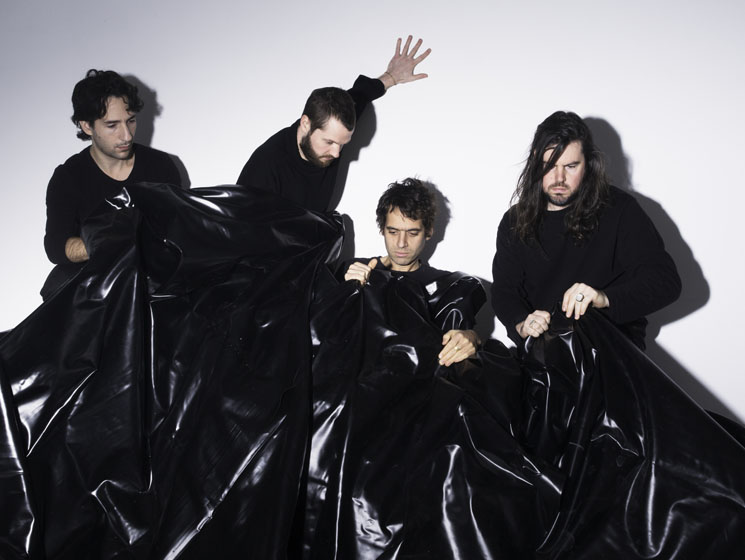 On a spring-like Montreal morning, Liam O’Neill and Joe Yarmush — two parts rock quartet Suuns — are smiling and joking about the antics Joe’s kids. “Happy” and “pleasant” are not normally associated with Suuns — whose industrial-leaning, moody, onerous rock has been in the public sphere since 2010 — but Felt, their fourth album, is not weighing as heavily on their souls.

“We kind started making this record by accident,” O’Neill tells Exclaim! “We started doing demos by ourselves and things were sounding really good. We had been talking the whole time about working with a producer, and then by the time that conversation came to a head, we were already done the record. It was very, very easy.”

Until this point, Suuns have been digging; searching for some sort deeper, darker sound. Their previous release Hold/Still is steeped in palpable, morose tension; their visuals for “Translate” and “Instrument” served as an extension this. Produced by John Congleton (St. Vincent, Explosions in the Sky) and recorded at his studio in Dallas, Hold/Still was the product an intense three weeks.

“It was a lot work. It was a good experience, but I don’t think we had it in us to do it again,” concedes Yarmush.

Felt veers slightly and surprisingly to the band’s lighter side. Mixed by Congleton, whom they invited to Montreal this time, and recorded at Breakglass Studios, Felt feels like a different beast. While all the classic Suuns elements are still there — Ben Schemie’s smooth, at times muffled vocals; Max Henry’s electronic experimentations; guitar and bass-driven tracks led by Yarmuch and elevated by O’Neill on drums — the atmosphere Felt is more relaxed, less constrained by time.

“It was done in very short spurts. It was four days here, take f a few months to clear our heads, four days next month, so that was easy too — we could have our lives,” O’Neill says. “Recording Hold/Still was very much like our lives were on hold. We were in this tiny world for a really long time. Whereas with this, our worlds were still open.”

“There was no pressure, we were just kind exploring, working things through, and following our noses,” Yarmush adds. “At the end we kind looked at each other and said ‘I guess we’re done.’ I think Felt marks a bit turning point. We did three records that are sort dark …”

O’Neill jumps in: “There’s only so much mustard you can get out that.”

“Watch You, Watch Me,” the first single f Felt, is quick-paced, urgent, buoyant, even. The accompanying music video directed by Russ Murphy is laden with pinks and blues and flecks gold; its images blended and photoshopped together, painting Suuns’ innate brutalism in a multitude hues.

And while these news songs may initially grate against some diehard Suuns fans who are looking for an even deeper, Bauhausian dip, rest assured: Suuns’ core is still intact. They’re just experimenting with new sounds, and refining some their edges. They’re also having a great time doing it.

“After you’ve been at is as long as we have, things can feel quite difficult. It can be hard to find the energy to do certain things… but it felt like your first record again” says O’Neill.

Felt is out March 2 on Secret City/Secretly Canadian. Check out the video for “Watch You, Watch Me” below.