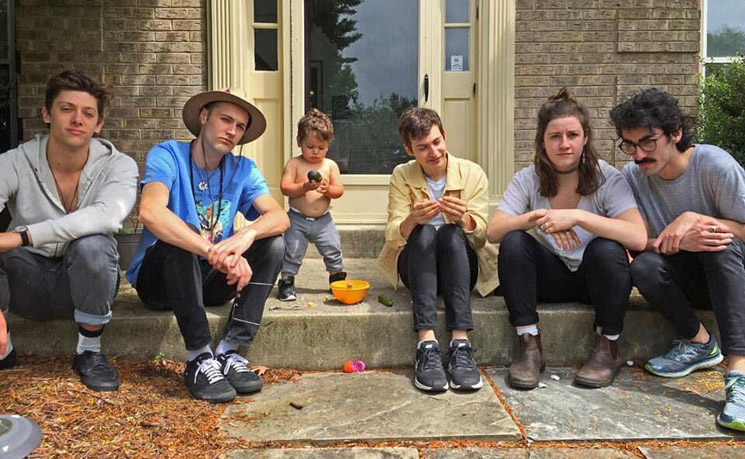 Since it was first uploaded to YouTube in May 2015, nearly eight million people have watched Matthew Rogers’ and Ethan Soil’s viral video “how to write an Alt-J song,” where the pair compose a pitch-perfect parody indie rockers Alt-J with little more than vocals, a loop pedal, shaker and tambourine, all while munching on some rice cakes.

But beyond their viral fame, the pair have been crafting jazzy psych-rock as members Fleece since 2013, releasing albums Scavenger in 2015 and Voyager in 2017. As the band start gearing up to write their third LP, we spoke with Rogers and Soil about Fleece’s formation, the now-infamous video and its impact on the band.

Rogers, Soil and Fleece bassist Gabe Miller first started jamming together at summer camp. “We all just kinda started playing together every day. It was just horrendous. We didn’t know how to explain what key we were in. We all just wanted to make noise. And then we’d finish playing and go, ‘That was sick!’ And it was bad,” says Rogers. Back in Toronto, the group continued playing under the name Darbus Fridge until the members graduated high school.

Rogers and Soil became friends as teenagers but they had originally met in kindergarten, though they weren’t close friends then. “We started being friends again in grade 10,” remembers Rogers, “And my mom’s like, ‘It’s so funny you’re becoming friends again because when you were 6, I used to turn to you and ask, “Do you want to go to Ethan’s?” and you would nod your head, “No!”‘ I feel bad about it. Sorry.”

Though now based in Toronto, Fleece formed in Montreal, where the members attended university.

In 2013, Rogers, Soil and Miller moved to Montreal to attend university: Rogers and Soil attended Concordia while Miller studied at McGill. In Montreal, they formed Fleece with McGill students Jonathan Bell and Colin Spratt, with Bell and Rogers sharing frontman duties.

Says Rogers, “Jon was writing half the songs and I was writing half the songs, but then we’d all compile them and arrange them together, and that’s why we named our first album Scavenger, because it was like taking a bunch pieces from different places and trying to make one sound together, even though we all had completely different sounds. I think we kinda pulled that album f, but if you listen closely to it, you can tell who wrote what song. Jonathan’s style is very much guitar-driven, kinda like garage-rock-y, and I was more into the ambient, indie rock realm. But combining it got to the Fleece sound.”

When it came time to write and record the band’s second record, Bell and Spratt had left the band, and the remaining trio worked on what became Voyager. While the band are largely satisfied with the results, there are large parts that approach that they seek to change as they prepare new material.

Says Rogers, “Right now, the problem with Voyager is that we didn’t play a lot the songs live. We wrote them and then we taught them] to the rest the band, and they changed after, because there were things that worked better with the rest the band. So this time we’re gonna write the songs, play them live, see how they play out, then record them.”

The band’s upcoming third album will be the first with their new lineup.

Shortly after releasing Voyager, the trio added vocalist/synth player Megan Ennenberg and guitarist Jameson Daniel. Moving forward, the band want to spend more time road-testing songs in order to bring out “the strengths the players the band and what they do best and what they contribute to the sound instead what we wanted to hear,” says Rogers.

Rogers and Soil look forward to incorporating Ennenberg and Daniel’s strengths to Fleece’s sound. “Megan is an incredible songwriter, but hasn’t written any songs for Fleece yet. She has more a folk-rock sound and her songs are really awesome. We still haven’t had a chance to start doing that. And Jameson’s super into sampling and pretty funk-driven. And he’s an incredible jazz pianist,” reveals Rogers.

The pair used to resent their viral fame, but have learned to accept it.

Their infamous Alt-J video went viral instantly, accruing millions views within days being posted online. The pair initially resented their viral fame. “The reason why I didn’t like it is because I felt judged by a lot people that were in the Montreal music scene,” says Soil. “Obviously there was some jealousy and resentment, but people were always judging us, like ‘They’re only famous because this video. They didn’t earn it, they didn’t work hard for it.'”

Adds Rogers, “It wasn’t like an embarrassment, but it was this classic ‘serious artist releases something, but the only thing that someone likes is their commercial jingle’ thing. This is something we did in two minutes and this is what everyone loves? I think it was kinda confusing for me for a while being like, ‘Why is it that stuff I work really hard on doesn’t get any attention but this does?'”

But over time, the pair have come around on the video, and have even learned to incorporate some their successes from the video into their music. Says Rogers, “The Alt-J song was written on the spot, it was totally improvised, so maybe that’s a strength ours and a direction we should go in. Maybe something that we write f the bat that’s simple and catchy is what’s good for us. That’s why I like it now.”

To this day, Alt-J have never reached out to the band, though they changed their Twitter picture to a rice cake.

Many who viewed the Alt-J parody discovered Fleece, and have remained fans the band.

Several years after the video’s release, the band are still benefiting from its success. “I am so grateful for the video] because we wouldn’t have been able to tour the States] without that,” says Rogers about the band’s 2017 tour, which was funded Kickstarter. It was on that tour that the band were able to meet some their biggest fans. “The first show we played in the States, there was a girl named Lily who recognized Megan and Jameson, who had only been in the band for a few months at that point,” says Soil. Adds Rogers, “I’d say 14 the 16 places we went to across the States, there was always one superfan saying, ‘Thank you, you’ve changed my life.'”

“The fans we got because it — they love the video and it really shows our personalities, and then they listen to our music and they become so dedicated because they feel like they know us on a personal level and on a musical level,” says Soil. “They all wanna know everything that’s going on in Ethan’s life. Everything,” adds Rogers.

Though the group are best known for their affable, fun-loving personalities (perks from the aforementioned Kickstarter included Soil’s shirt from the Alt-J video and Rogers’ moustache), the music’s more serious undertones still resonate with their fans. “Voyager] is about me talking to myself in the past as a closeted person who’s secretly gay, and there were some queer people there who were like, ‘That album helped me a lot.’ That was nice to hear,” says Rogers.

Fleece play Bar le Ritz PDB in Montreal on January 19 and the Horseshoe Tavern in Toronto on January 26 as part Exclaim! and Ticketfly’s Class 2018 concert series.