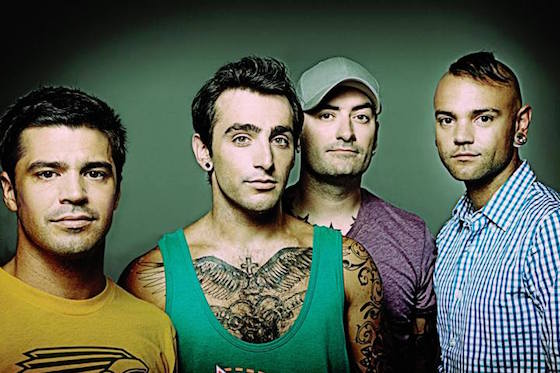 This week, long-running Canadian pop band Hedley have been ousted from the Junos and lost a number contracts over allegations sexual misconduct with fans as young as 14. In a statement, the band chalked up their behaviour to “a lifestyle that incorporated certain rock and roll clichés.” However, rumours their alleged misdeeds go all the way back to their early days. A story has now resurfaced regarding an alleged police investigation that involved an underage concertgoer being found outside a Hedley concert in London, ON, who had been drugged and possibly raped in 2005.

Rob Bazinet worked at London’s beloved all-ages venue the Embassy for 11 years, serving as its general manager until the venue burned down in 2009. At the time, Bazinet was so synonymous with the venue that he earned the nickname Embassy Rob. (He has since taken the surname Houde through marriage and now works as a licensed security ficer.)

Speaking on the phone with Exclaim!, Bazinet recalled vivid details about an unnerving Hedley performance at the Embassy when the group were first starting out.

The show — which took place on September 18, 2005 (as confirmed by a Web Archive capture the band’s ficial website) — was part the band’s first cross-Canada tour after Jacob Hoggard took third place on Canadian Idol. At the time, the lineup for Hedley included Hoggard alongside guitarist Dave Rosin, bassist Tommy Mac and drummer Chris Crippin.

“All day, they were jerks to everybody,” Bazinet recalls. “The way they treated women and fans and even the bar staff was horrendous.”

He continues, “We were an all-ages venue. So we would have people as young as 14 at concerts. Now, with the Hedley show, they knew that going in. I made it very specific that they knew, and that we had black X’s on the hands for minors so that if they wanted to buy drinks for girls or flirt with girls, we gave them the knowledge age and below age. So they knew this going in.”

After their performance, Bazinet noticed something was strange when he went to check on the band in the green-room apartment above the venue.

“I went up as part my job to see if everything was okay, make sure that none our equipment was up there accidentally, make sure the rider had been fully fulfilled and that the night was over,” he says. “When I got up there, I went to check — and usually I’d check the whole space — but one the bedrooms had the door shut. And I went to go check it, and the rest the band got in the way.”

Though Bazinet doesn’t remember which member the band was in the room, he claims the remaining members Hedley barricaded him from entering. “The feeling I had at the time was that I would’ve had to force my way into that room.”

Bazinet assumed the member in the bedroom just wanted privacy, so he went back downstairs to the bar. The way the Embassy was set up, he couldn’t see when the band actually left, Bazinet explains, but at some point they packed up and left the green room. Then the police arrived, according to Bazinet.

“They had found a young woman, unconscious with no shoes by the TD Bank, which was a block away,” he recalls. “They took her to the hospital, they ran a blood test on her because they thought she might be drunk or on drugs, and it came back that there was rohypnol known as a date rape drug] in her system.”

The police linked the girl to the Embassy because the stamp on her hand.

“They went upstairs, we gave them permission to go through the green room. They found her shoes in the green room,” Bazinet says, recalling that the shoes were “little leopard-print flats.” The police contacted the girl’s parents, seeking permission to utilize a rape kit.

“She woke up, refused permission, and the investigation stopped,” Bazinet adds. “The police couldn’t do anything.”

Doing their due diligence, the police kept the Embassy’s green room cordoned f for a week, according to Bazinet. “They came in two or three times, did things and left,” he says.

When Bazinet reached out to the police for a report, they wouldn’t release the girl’s name. He also remembers that she had an X on her hand, suggesting she was below the legal drinking age.

“From what I understand, the girl was underage. So her name is sealed. But there’s a police report from that night that says Hedley is the suspect.”

With their green room taped f, the staff the Embassy were repeatedly asked questions by patrons about what happened, and for a little while, the staff was talking about it.

“Our promoter and the owner the club, were sent letters from a law firm, and they said that the talking about Hedley was to immediately stop, or they would sue,” Bazinet recalls. “And it was on behalf Hedley, their management and their label. I read the letter, but I was never given a copy. I don’t know if there are still copies.”

Because the letter, the Embassy’s staff were told that if they spoke out about the alleged Hedley incident they would be fired. However, when the allegations about Hedley popped up online earlier this week, Bazinet made his public Facebook page readily available on Twitter.

“It seems like the band is very careful about ages,” Bazinet says his recent conversations with their other alleged victims. “Are they just really creepy guys and they’re running that line between creep and rapist? I don’t know.”

Bazinet recalls making small talk with the band in London before the group started acting out towards the Embassy staff.

“They asked things like the ages the people coming to the bar, they asked about the laws in Ontario and stuff,” he says. “At the time, it seemed like conversation. It was like, ‘Oh all-ages shows, you guys must have problems with staff members sleeping with underage girls,’ and we would say, ‘No, we mark them this way.’

“Then somebody brought up that in Ontario at the time the legal age for sex was 16, and things like that got brought up. They were like, ‘Oh we didn’t know that.’ It seemed at first like they were being tourists as a band, and they didn’t really know what life in Ontario was like. And the next thing you know, we’re all losers and they started doing whatever they want.”

Bazinet says he’s been contacted by women from Vancouver, Ottawa and Toronto, all whom have horror stories about the members Hedley but are too afraid to speak out. Exclaim! has also received accounts alleged misconduct from women who wish to remain anonymous.

Earlier this week, the hashtag #outHedley2k18 emerged on Twitter as numerous people shared allegations about sexual misconduct from the members the band. They responded with a statement about the allegations, but their performance at the Junos was cancelled while other partners like Air Canada have cancelled promotions with the band. That said, Hedley are still forging ahead with their cross-Canada tour. Their show in Brandon, MB, on Friday (February 16) has banned all press from attending.

Ed. Note: A previous version this article contained certain Embassy staff members’ names. As per their request, we have now removed their names from the article following its initial publication.]