Bob Marley widow Rita Marley was once again the center attention at another public event.

Rita Marley, the matriarch the Marley family, is rarely seen in public these days ever since she suffered a stroke in 2016. Last weekend she showed out at the annual International Reggae and World Music Awards (IRAWMAs), and she enjoyed the event. At one point she was seen grooving to Beenie Man music as the dancehall legend performed some his classic hits. The Jamaican music icon smiled as she waved her left hand to the beat the rhythm.

Rita Marley was instrumental in the formation the IRAWMA awards in 1982, a year after Bob Marley died at the Cedars Lebanon Hospital in Miami, Florida. The 37th staging IRAWMA was held at The Jamaica Pegasus hotel in Kingston on Saturday, May 11. A wheelchair-bound Rita Marley was the center attention as the show tribute her with two awards. IRAWMA founder Ephraim Martin told the audience that Rita was instrumental in the formation the awards show that recognized reggae music. 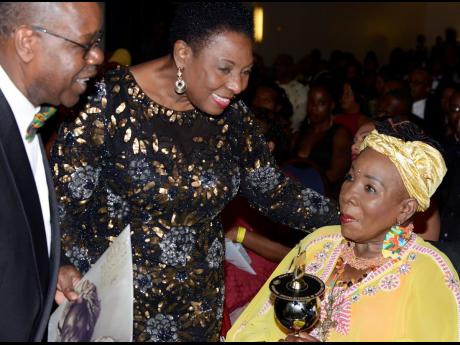 Rita Marley enjoyed music from the likes The Heptones, Top One Frisson from the Congo, and U-Roy. However, it was Beenie Man who got the best response from her. Several other local celebrities greeted her and posed for photo ops as she was warm and welcoming to all them.

Earlier this year, Rita Marley made her first public appearance in Jamaica since her stroke in 2016 when she joined her musical sisters Marcia Griffiths and Judy Mowatt on stage at the 2019 Jamaica Reggae Industry Association awards.