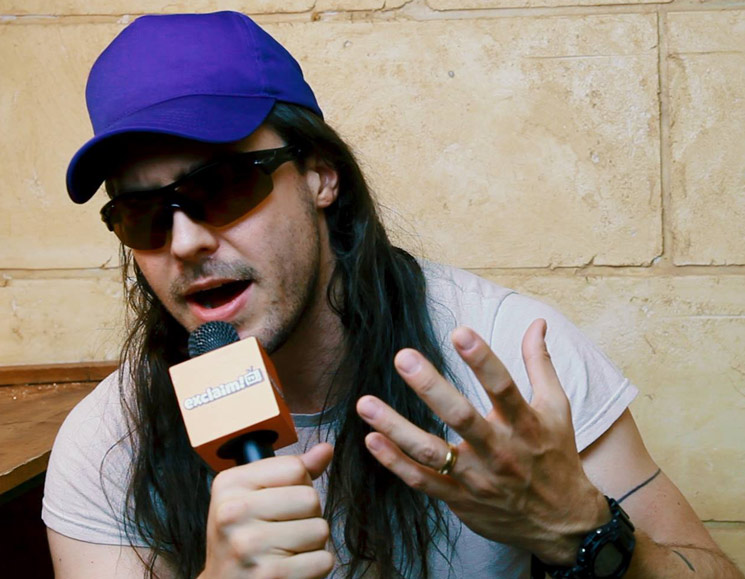 Given the party-rock nature Andrew W.K.’s latest album You’re Not Alone, one might find it surprising that many his early influences stem from death metal.

“As a child, I’d heard band names or seen album covers… imagery that I assumed would sound intense,” says W.K. in a new interview with Exclaim! TV’s Aggressive Tendencies. “Often times, the music was much more straightforward than that.”

W.K. recalls being given a bag CDs from a peer in high school. Assuming once again that the music would lack the intensity he had hoped for, W.K. was proven wrong by the works Obituary, Napalm Death, Autopsy and Cannibal Corpse.

“Much to my delight, the music was very monstrous sounding,” W.K. explains. “It finally sounded the way that I imagined this music would sound. It didn’t sound like people singing. It sounded like a monster singing.”

However, W.K. understands that citing someone like Obituary vocalist John Tardy as an immediate sonic influence in his music “would be a fluke.”

“I can’t even hold a candle to John’s singing,” says W.K. “I don’t sound like him, out respect for John. He sounds like there’s one thousand frequencies all distorted, perfect, smooth… I don’t know how he does it. The only other person I’ve ever heard that can sing like John Tardy is his brother, Donald. It runs in the family.”

It was Donald himself who made a colossal impact on W.K. throughout the formative years the band.

“Donald basically made my band,” says W.K. “He assembled this team that allowed our adventure to begin.”

In the late ’90’s, W.K. met a man while he was living in New York who had grown up in Florida with the Tardy brothers.

“Somehow Obituary came up because I talk about them a lot. I always have,” W.K. outlines. “I couldn’t believe that. It was like finding someone who’d grown up with Benjamin Franklin or something. That’s how immense Donald was to me as a figure, as a musical icon.”

W.K. wrote Donald a letter and sent him a CD, asking him to play in his band. The decision was something that in hindsight he admits was “an absurd thing to do.”

“I didn’t really think not to do it, because it seemed like, why not do it?”

One week later, W.K. arrived home from work to find a voicemail from Donald stating that he was interested in joining the project.

“That was the first instance in my life where a dream had come true.”

You can watch the entire interview with Andrew W.K. on Aggressive Tendencies in the players below.